Audiences around the world have thrilled to the sly villainy of Scar in The Lion King, Jafar in Aladdin, and the Janus-faced Gaston in Beauty and the Beast, all brought to life by master animator Andreas Deja.

Andreas’ subtle touch allows moments of laughter to seep through their malice, but makes it clear that these full personalities are vicious creatures, not to be trusted. 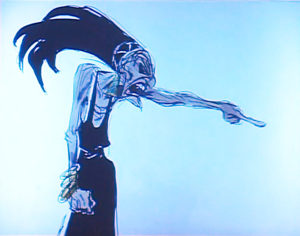 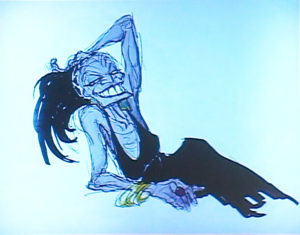 Andreas has also convincingly portrayed dimensional heroes, including mighty, but naive Hercules (Hercules) and King Triton (The Little Mermaid), a regal but exasperated dad.  Also on the lovable side of the emotional spectrum, he has animated a troubled, adorable child (Lilo Pelekai in Lilo &Stitch), and a 197-year old warm and sweet and scary voodoo queen, Mama Odie (The Princess and the Frog).

He has proven himself able to handle zanies, such as Goofy and Roger Rabbit and Tigger.  And Andreas is a thoroughly modern Mickey Mouse expert, having animated the sacred rodent in The Prince and the Pauper, Runaway Brain, and Fantasia 2000.  (I visited Andreas at the Disney Studio in 1999 and watched him animate a scene of Mickey shaking hands with conductor James Levine, and I always regret not taking a snapshot of that moment.)

Andreas and I have been friends for a long time, I’m proud to say.  He is kind, humble, incisive and decisive in his thinking, witty, and one of the most generous people I know.  When my book Walt Disney’s Nine Old Men and the Art of Animation was published in 2001, Andreas threw a big celebratory party with dozens of animation industry guests at his beautiful Los Angeles home, an evening I will never forget.

On April 18, 2005, he came to New York on his own dime to enthrall my NYU Tisch students by discussing, and showing, drawings from his various projects.

For the recent exhibition Wish Upon a Star: The Art of Pinocchio at the Walt Disney Family Museum, Andreas loaned a large and precious number of rare original sequential drawings by the film’s great animators (e.g., Tytla, Moore, Babbitt, Thomas, Johnston, Larson, Kahl, Ferguson, Lounsbery, Kimball, among others) from his legendary personal collection, a gesture of friendship that made the exhibit sing with authenticity.

Andreas is a born teacher with a deep knowledge of the history of the art that he practices so well.  His lectures around the world inform and inspire.

Last year he wrote and published The Nine Old Men (CRC Press, a Focal Press Book), a tribute to the legacy he inherited from his personal mentors Eric Larson and Milt Kahl. It is, hopefully, the first of many books on lessons, techniques and inspirations he’s garnered during an amazing career.

Since leaving the Disney studio, Andreas has been working on his own independent production: Mushka “a story of love and sacrifice set in Russia” starring a little girl and her tiger.  Original art from this eagerly-anticipated film, among other treasures from Andrea Deja’s distinguished career, including his wire sculptures of characters and animals, will be showcased at the Walt Disney Family Museum, located in the Presidio in San Francisco from March 23 through October 4, 2017.

For his many fans around the world, it is an event not to be missed!  Click here for more information.

One thought on “Deja View: The Art of Andreas Deja
at the Walt Disney Family Museum
March 23 – October 4, 2017”