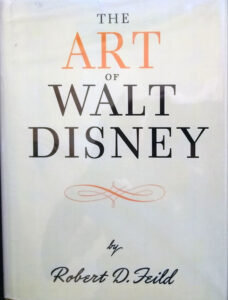 In 1942, a beautiful conceptual artwork for Disney’s Fantasia (1940) occupied a full black-and-white page in Robert D. Feild’s The Art of Walt Disney, the first book to seriously examine the Disney studio creative processes.

Former Harvard professor Feild used the illustration to praise the Layout and Background Departments, whose artists “must possess a unique sense of design, a pictorial imagination allowing them to build up compositions that can be broken down into any number of separate pictures, each having an integral unity of its own.”

No artists were credited to any of the book’s illustrations, and the original color version of this concept has never been published until now. It was painted and signed, in August 1938, by J. Gordon Legg (1909 – 2003), one of Fantasia’s art directors, during the exploratory stage of the so-called “concert feature.” The Disney artists were exploring various Greek and Roman mythological characters and stories for possible use with music from Pierne’s ballet, Cydalise, which ultimately was replaced by Beethoven’s Symphony #6, the “Pastoral.”

Legg’s imagery depicts a grove of hamadryads, or tree nymphs,  free spirits who, in Greek mythology, lived inside trees.

There is mystery in the painting. It has a strange mood, at once peaceful and disturbing, its calm colors contrasted with the naked writhing  forms of nymphs visible within the tree trunks.

Robin Allan, author of Walt Disney and Europe, quotes a 1976 Legg interview by Milton Gray regarding the design and color used in Fantasia’s “Pastoral” sequence:

“They wanted Classical backgrounds … and they didn’t care too much how accurate it was.  I kind of followed Grant Wood and Rockwell Kent — you know, cleaned up the trees, so that everything was neat and clean and precise. It was like Forest Lawn. I wanted to keep the colors rich and subtle — olive greens and maroons — played down colors like you see in the Italian School … I worked with Ken Anderson; he was the final layout director [for the “Pastoral” sequence], and a very talented artist. But I guess Disney got in there someplace and said, ‘Let’s brighten this thing up.” That’s where we got into the peppermint candy. It bothered me; I didn’t want it that way. It was too sticky, too sweet.”

One of the final “Pastoral” production backgrounds, shown below, illustrates Legg’s criticism of  the sequence’s color palette.  The circular pavilion featured in the painting  was likely inspired by the Temple of Love at the Palace of Versailles.

Allan concludes, “Throughout this section there is reverence for and misunderstanding of sources,” or what film reviewer Helmut Farber called “Kunst und kitsch.”

John Gordon Legg joined the Disney studio on April 13, 1936 after a period as a student at Chouinard School of Art in Los Angeles and work as a commercial artist. His airbrush expertise led to designing many of Disney’s short film title cards, such as Woodland Cafe (1937),

and the pages of the large tome that opens Snow White and the Seven Dwarfs (1937).

Diana, the personification of night, shooting a star into a dark sky with her silver hunting bow.