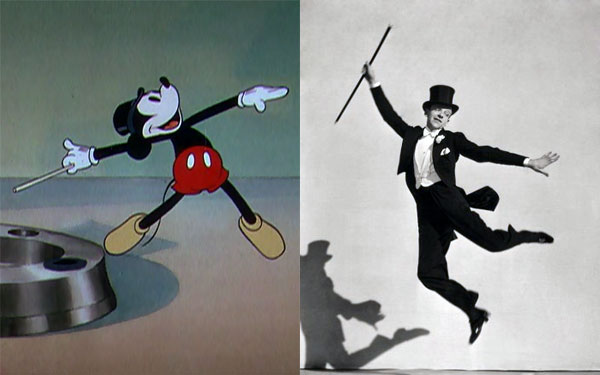 “Mr. Astaire is the nearest approach we are ever likely to have to a human Mickey Mouse,” wrote Graham Greene reviewing Fred Astaire in Follow the Fleet in 1936. “He might have been drawn by Mr. Walt Disney, with his quick physical wit, his incredible agility,” Graham continued. “He belongs to a fantasy world almost as free as Mickey’s from the law of Gravity.”

Each semester in my Action Analysis classes at NYU, I screen at least one performance by the great dancer Fred Astaire (1899-1987), and it’s not just for my own pleasure (though I admit it is an exquisite pleasure to see such perfection in motion).  I believe that animators are, in essence, choreographers.  When the students and I break down Astaire’s dances frame-by-frame, we see the superb clarity of his movements demonstrating all the basic principles of animation; and, equally important as mechanics, his intricate and entertaining choreography is always in support of the sequence’s acting goals.

The course is an opportunity to introduce students to the work of performers like Astaire.  Most of these avid 19- and 20-year old emerging filmmakers will never have heard of him before, and it is always fun to watch a new generation respond with amazement and delight to his timeless talent.

In his flawless performances, Fred Astaire seems otherworldly.  His film performances are miracles of sharp timing, strong poses, and charming inventiveness.  He is always elegant and perfectly turned out whether dressed in formal tux, tails and top hat, or in casual garb.  A romantic poet in motion, Astaire’s style — in dance and his appearance — continue to be envied and emulated.

Everything he did on screen could become a dance, even a simple walk —  see Funny Face (1957), when an ordinary stroll down a Parisian boulevard becomes one by virtue of a subtle change of energy and timing, as he sings a jaunty “Bonjour, Paris!”

His incredible mastery of props is showcased in another clip from the same film, in which Astaire woos Audrey Hepburn by miming a matador, using only his raincoat, hat and an umbrella to fight (and flee) an invisible bull.

One particular favorite film clip for animation students to study repeatedly is the “Pick Yourself Up” number, from Swing Time, the delightful 1936 musical featuring Astaire’s iconic dance partner of the Thirties, Ginger Rogers:

The animation principle of Squash and Stretch is visible in the elongation and compression of the couple throughout the dance; “anticipation” is seen in the necessary preparatory movement that precedes Astaire lifting of Rogers, while “follow-through,” a secondary movement trailing a main action, is present in the way Roger’s skirt and hair and Astaire’s coat tails, follow and arrive late after the primary body movements.

I could go on, including the principle of Arcs (an organic as opposed to a mechanical trajectory); “easing” into and out of movements; exaggeration and staging for clarity and entertainment value; and “overlapping action,” in which certain actions occur at different times.  Note, too, the “texture” of the timing – the couple’s varying of staccato, hard, sharp steps with creamy-smooth flowing movements.

Astaire and Rogers also give an acting performance within the dance that drives the narrative.  For they dance with a purpose — in this case demonstrating to a curmudgeonly boss (Eric Blore) that Ginger Rogers, a dance instructor, has just taught Fred Astaire this intricate routine.  Such were the suspension-of-disbelief plots of 1930s Hollywood musicals.  Throughout their demonstration, Astaire and Rogers continually look toward Blore, miming, “See?  Look how easy it all is.”

For the finale, dance critic Arlene Croce wrote “the music has switched to a new riding theme that creates a wave of exhilaration – and anxiety:  they’re going out but they can’t possibly get out that fast. Yes, they can, and calmly: clear across to the other side [of the room] and out.  They walk away leaving everything in flames.”

Another thing I love about Fred Astaire: even in films that are near misses or outright duds, he always has at least one number that transcends the plot material and ascends to artistic heights. Yolanda and the Thief (1945) is precisely such a lavish failure, a fantasy musical that had everything going for it: gorgeous Technicolor styling and direction by Vincente Minnelli, a wonderful cast, backed by the full production values of the extraordinary Arthur Freed unit at MGM.  Unfortunately, the script is full of soggy whimsy and artsy pretension. Yolanda has, however, become a cult favorite primarily because of two Astaire dance sequences; one, an extended Dream Ballet stuffed with Dali-esque surrealist imagery.  Like the film itself, the dance number is fascinating, but ultimately fails to live up to its promise:

As the film clip below notes, the pulsing jazz-oriented musical arrangement is in 4/4 time to which the dancers, choreographed by Eugene Loring, move in 5/4 time.  It is mesmerizing. Minnelli’s signature fluid camera moves become yet another dancer, and the editing adds to the excitement of performance, especially after a false ending, when music and dancers build again to an intensely satisfying crescendo.

Leading the way with dynamic energy and star power is Fred Astaire. He is the sun around which everything else revolves; his dynamism brings essential magic to the sequence.  Reviewing the film in 1945, The New York Times noted that “Coffee Time puts movement and color to such use as you seldom behold on the screen.” Behold it and Fred Astaire in all their glory at the link below.  See if you can keep yourself from cheering at the finale of this dance routine:

Even Mickey Mouse imitated him.  In Thru the Mirror (1936), one of Disney’s best color shorts, the agile cartoon mirrors the dancing man. Mickey cavorts atop at giant silk cylinder hat parodying the title costume from Astaire’s Top Hat, a feature released the year before (1935) by RKO, which was to become Disney’s film distributor in 1937. Wearing a smaller version of the topper, Mickey partners with an anthropomorphic matchstick. While no match (sorry) for Ginger Rogers, who was Astaire’s film dance partner at the time, the stick literally adds fire to the mouse’s toe-tapping steps until it’s replaced by a pair of strutting white gloves carrying (again) a top hat and large walking stick.

It wasn’t the first time Disney tipped his hat in a toon tribute to Astaire. In 1935, Disney’s Silly Symphony Cock o’ the Walk used the rhumba “The Carioca” from the first Astaire/Rogers teaming, Flying Down to Rio (1933), to stage an elaborate barnyard musical number with hens, roosters, ducks, geese, and even peacocks for a splash of extra color.

None other than Lincoln Kirstein, co-founder of the New York City Ballet, found the cartoon “an inspired satire on a Busby Berkley super-duper, but its color and fantasy were incidentally beautiful in themselves.”

Vladimir Tytla animated the dancing rooster and hen, and it marked a breakthrough in the quality of Disney animation.  Walt Disney always sent detailed, generally scathing critiques to the animators after every short film was completed.   Of Tytla’s work in Cock o’ the Walk, however, he conceded that the animation “was a big step forward…As far as the dancing of the characters is concerned, a good result was obtained.”

Disney added that “something was started…which is what we are striving for.  That is, doing things in the dance which humans are unable to do.”

3 thoughts on “FRED AND MICKEY. MICKEY AND FRED”