Last night at NYU Tisch School of the Arts, Disney Legend Floyd Norman, age 81, the first African-American animator at the Walt Disney Studio, and his wife Adrienne, screened their wonderful 2016 documentary, Floyd Norman: An Animated Life.  Afterward, they and the film’s co-directors, Michael Fiore and Erik Sharkey, participated in a Q&A that I moderated.

Norman’s extensive career in animation began in 1956 at Disney, where he worked on classic features, such as Sleeping Beauty, The Sword and the Stone, Mary Poppins, The Jungle Book —  sometimes as an animator or layout or story artist, and sometimes in Disney Publishing as a book illustrator and comic strip writer.  During his sixty-plus years in the animation industry, he has also worked at Hanna-Barbera, (Josie and the Pussycats, Scooby-Doo, and The Smurfs, among other series) and Pixar (Toy Story 2).  In the mid-1960s, he was co-owner of his own animation studio, Vignette Films, focusing on educational shorts about Black history. 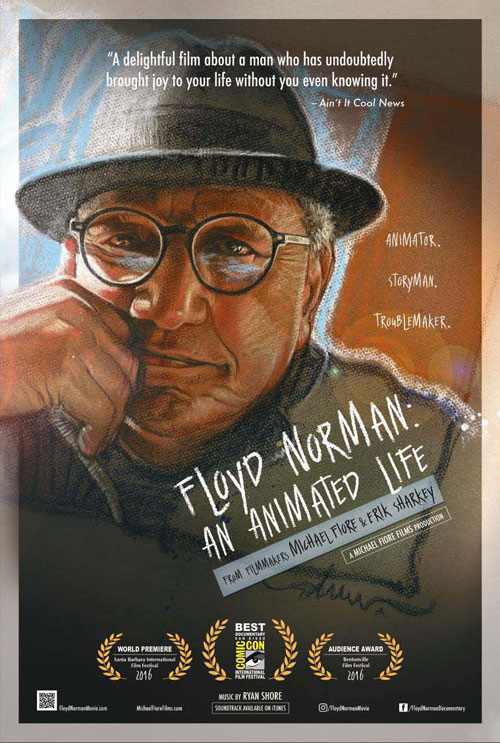 The 94-minute film is, by turns, funny, deeply moving and inspirational, and candid about Norman’s personal life, and his professional encounters with racism and, especially, ageism.

Floyd is a prolific blogger (MrFun’s Journal), whose hilarious gag-filled illustrated books on animation industry politics and business policies –available on Amazon.com – not only bite the hand that feeds him, but chomps it off at the shoulder.

Floyd and Adrienne, a gifted Disney publications artist in her own right, held forth for a Q&A that lasted nearly an hour.  Both are articulate raconteurs, and the audience of students and faculty were held by their charm, candor and ready humor.  They spoke truthfully about their lives, and the audience responded with respectful attention and many questions.

The Normans obviously love what they do.  Adrienne and Floyd’s positive, upbeat attitude was catnip to students starting on the road of their own careers in film.

The gist of their message can be found in this passage from one of Floyd’s blog posts:

Here’s the good news. Beginnings don’t have to end. If you’re smart, resilient and resourceful you can create your own beginnings. Reinvent yourself. Redesign yourself and screw the corporation you worked for. Walk away and move forward on your own. If you’ve been booted out take this as a cue to get started. Begin a new task.

2 thoughts on “Floyd Norman at NYU”