Canio’s Books is a tiny treasure of a bookshop in Sag Harbor, Long Island.  Housed within an old wooden building, it personifies the word “cozy” and has a time-tripping, Americana charm and warmth reminiscent of Norman Rockwell’s 1950 painting Shuffelton’s Barbershop, which depicts three rural elders ending their day by playing a violin, clarinet and cello in a barber’s back room.

Sometimes, Canio’s offers live music among the books rising like stalagmites from the floor and leaning from the crowded shelves.  But mostly it is the bookstores’ seminars, workshops and public forums that support the East End community’s interest in literature, visual arts, and current events.

One cold evening last November, the great Jules Feiffer was at Canio’s for a book signing and a “talk.”  Now in his late 80s, Feiffer recently published two brilliant graphic novels, Kill My Mother and Cousin Joseph. Click on the covers below to read my reviews in the East Hampton Star.

A Pulitzer Prize-winning editorial cartoonist, author of more than 35 books for adults and children, plays (e.g, Little Murders), screenplays (e.g., Carnal Knowledge), an Oscar-winning animated short (Munro), Feiffer is perhaps most famous as a speaker of truth-to-power for over forty years in his weekly Village Voice comic strip. 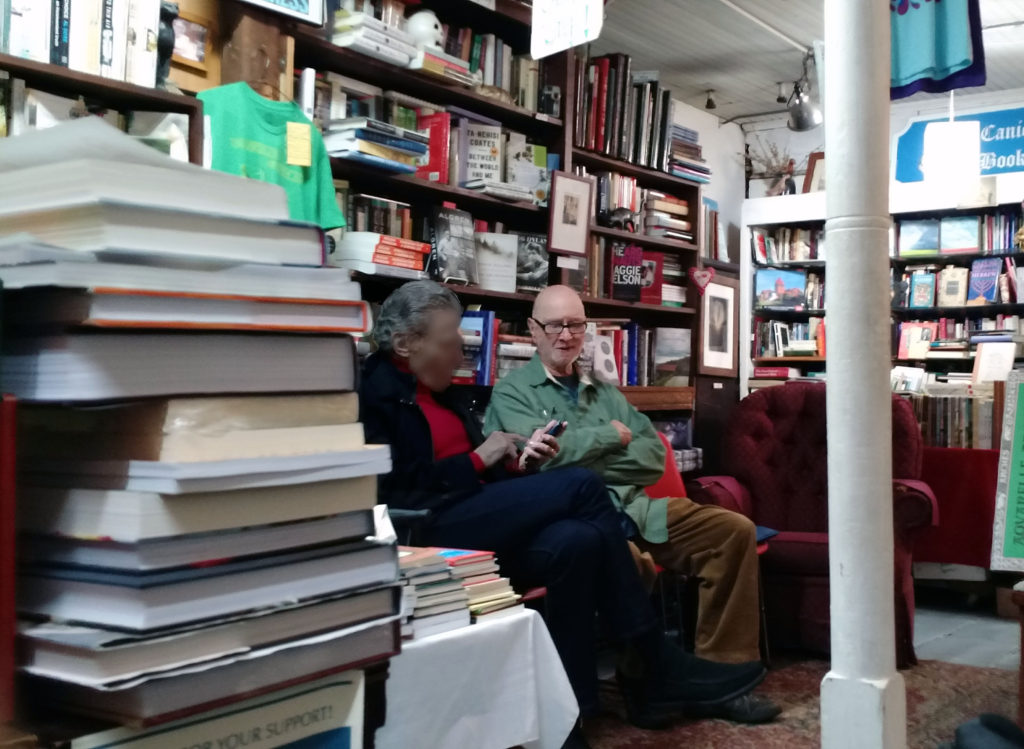 As an audience of about thirty assembled on folding chairs, Feiffer sat quietly on a couch.  Dressed in an oversized green shirt and brown corduroy trousers, bespectacled, bald, with a wisp of a white beard, he looked like a frail hatchling.

When he took to the podium on the postage-stamp stage, however, his innate energy and laser-keen intelligence came forth for a riveting demonstration of his art and political savvy.  First, he showed drawings and discussed a work-in-progress, The Ghost Script, the final of a trilogy of graphic novels. 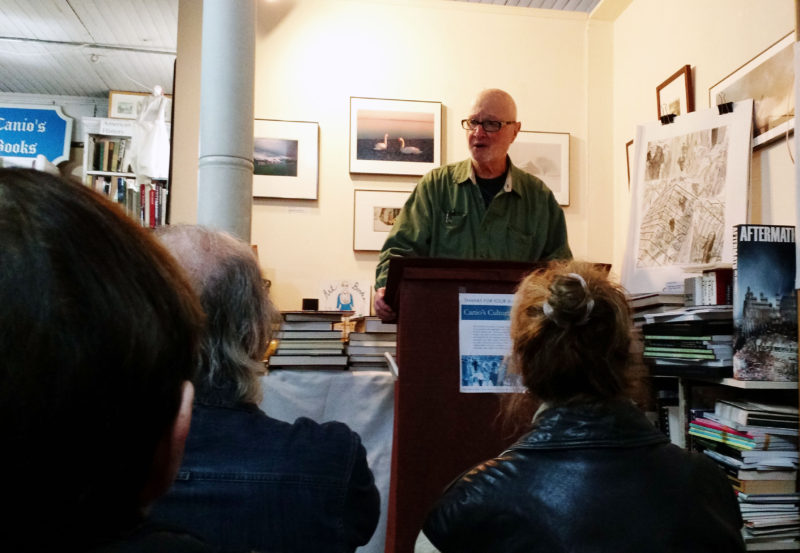 But soon he segued into the current event on everyone’s mind:  Donald Trump’s stunning upset against Hillary Clinton for the presidency.  Feiffer began by commenting that for years, “Republicans have wanted to kill the New Deal.”  And now, he said ruefully, they have their best shot at it.

He acknowledged the fear and loathing by many on the left, and the confusion about how to react and what can be done.  Then he read from a letter that he wrote to his three daughters on the night of the election to quell their fears and put events into a historical context. The letter is sharp, sober and tough.  And inspiring.  I asked his permission to publish it here in the hopes that it inspires you as well.

My Daughters,
None of this is new, it just feels new because we’ve suppressed our history.
Except, we know about the Indians, and how we slaughtered them, and broke treaties where we swore to protect them, and made Westerns glorifying marauding and murderous cavalry and ranchers. They were the good guys. Indians, whose land we stole out from under them, were the bad guys for resisting our theft.
And that still goes on, at this very moment, in Wyoming [Native American tribes supporting the Dakota pipeline dispute].
In the late 19th and early to mid-twentieth century, labor unions were denied the right to strike, or even organize. Strikes were broken up by police and National Guards, workers shot down or beaten bloody, and it was legal to do so.

Other workers, when they reacted with their own acts of violence, gave the government in the 1920s the excuse to seize foreign laborers and deport them, and their families by the thousands, intern others in concentration camps. There was no national debate on this.

Aliens, as we called them, were a threat to our sacred institutions, and good, hard working Americans had the right, the duty to defend ourselves against these outsiders, who were genetically inferior– science said so! — had smaller brains, were criminally inclined, carried communicable diseases that would infect and bring down the white race.
And then, all through the early 20th century, Negroes are lynched down South, and sometimes in the mid west. No one was brought to trial, and in the few cases that Klansmen were tried, they went free.
The vindictiveness and rage that brings us Trumpism is as old as the Constitution, even older.

But what makes us special as a people, and unique among nations, is that a minority, then a true constituency, and then thousands, and then millions put themselves on the line to fight for change. To encourage the dream that we were actually better than we often behaved, and miracle of miracles, slowly, with endless effort and countless defeats, we saw change.
And we, some of us, thought the fight was won, we had learned from our mistakes. Our history proved it.
But the truth, now and always, is that history has no learning curve, and old lessons, once learned are forgotten, or become twisted and rejected.

And so we must start from scratch, all over again. That’s the secret of America. We fight the same fights over and over and over again, without many of us knowing that today’s fight is a retread of previous fights going back decades, or centuries.
So Trump was elected President.

3 thoughts on “Close Up: Jules Feiffer at Canio’s”