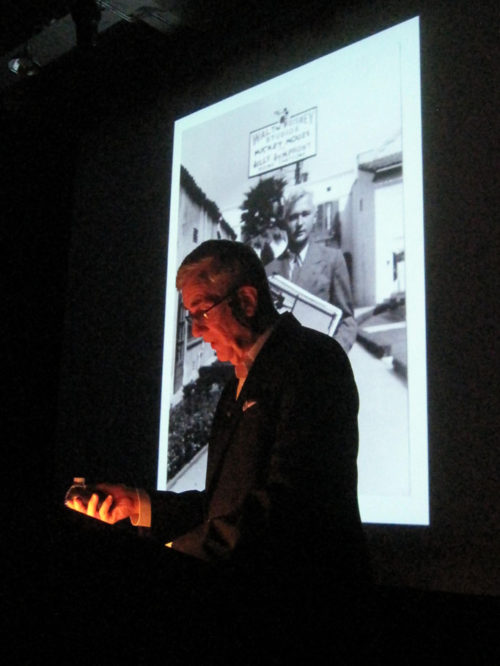 I had a wonderful day on March 3, speaking at Yale University and meeting with graduate and undergrad students.  My host was artist Johannes DeYoung, Senior Critic and Director of the impressive Yale Digital Media Center for the Arts.

This was not my first visit to Yale. Nearly forty years ago, I was a Guest Fellow for a couple of semesters teaching History of Animation.  And once, also during the 1980s, my friend Donald Crafton, the esteemed animation historian, author and founding director of the Yale Film Study Center, invited me to show my films.  I recall that during the screening, Don and I went for beers at famed Mory’s Temple Bar, and had such a good time, we nearly forgot to return to the theatre!

So it was nostalgic to be back last week.  After my lecture on The Lost Notebook: Herman Schultheis and the Secrets of Walt Disney’s Movie Magic, I met with five grad and undergrad students who are each working on fascinating projects utilizing film, painting, graphics, performance, and computers in various combinations and immersive ways.  Hasable Kidanu, Megan Brink, Sally Weiner, Sherril Wang, and Christie DeNizio – I thank you for the stimulating conversation, and I thoroughly enjoyed tossing ideas around with you.  Thank you, Johannes DeYoung, for the opportunity.