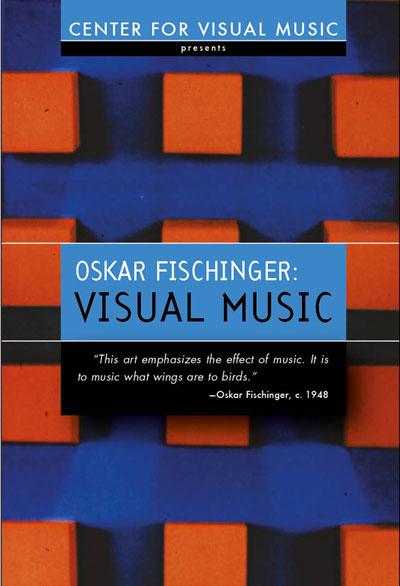 Films in this collection of brilliant experimental films by Oskar Fischinger (1900-1967), the great pioneer and master of abstract cinema, include:

“This art emphasizes the effect of music,” Fischinger said of his films in 1948.  “It is to music what wings are to birds.”  The new DVD joins an earlier release, titled Oskar Fischinger: Ten Films.  Both must-have collections are available, along with books and other Fischinger objects and ephemera at: http://www.centerforvisualmusic.org/store/StoreFisch.htm

Dali and Disney Destino – The Story, Artwork, and Friendship Behind the Legendary Film

Over the Christmas holiday, author David A. Bossert dropped by New York City with a “special limited edition” of his informative book about Destino, the unusual film collaboration between Walt Disney and Salvador Dali, and their subsequent Odd Couple friendship.

The musical animated short, based on original designs by Dali, was worked on intensely before being abandoned in the late 1940s.  In 2003, decades after the deaths of both creators (Disney in 1966, Dali in 1989), the Walt Disney Studio completed Destino by referring to Dali’s storyboards and concept art.  For the reconstructed film, which became an Oscar nominee, Bossert served as Associate Producer, which gives his book a unique personal perspective.

Newfangled technological packaging augments the text and illustrations on the limited edition version, making it pricey ($250).  Imbedded inside the front cover is high-def screening apparatus that allows the reader to play the entire 7-minute color film on video with sound, and then read the backstage story of the film’s production.  (The merely “deluxe” edition — that is, sans video — is $40.)

The next Bossert book to get the embedded video treatment, he told me, may be Oswald the Lucky Rabbit: The Search for the Lost Disney Cartoons, the detailed history published last August about of Disney’s pre-Mickey character.  In the near future we will likely see more books with implanted videos.  Experimental technology is now being tested by Disney and other publishers to allow moving pictures with soundtracks to be “printed” on individual book pages. 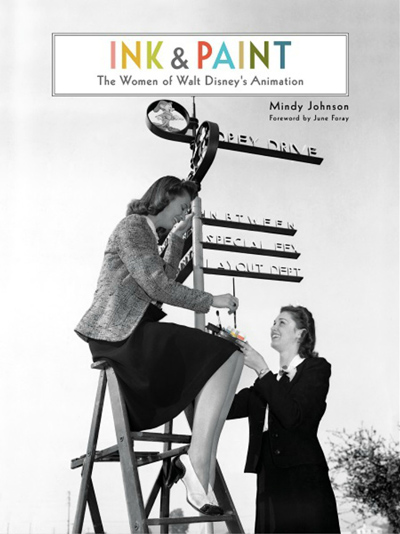 Deep research and fresh documentation offer detailed descriptions of the work and lives of formerly anonymous female artists and artisans, and their impact on Disney’s oeuvre.  Johnson names many of these women, and thoroughly examines the development of their artful production techniques in applying ink lines and opaque color to celluloid animated film characters through the years.

Delving chronologically into the Jazz Age, Great Depression, War Years, Civil Rights Era, and other historical references, the author places women and their jobs within a wide world context.  She also offers a succinct history of women working at hand-tinting pre-cinema photos, as well as the earliest film productions (e.g., coloring films for Méliès and Pathé), and she recognizes unsung female animators in studios before and after Walt Disney came on the scene.

In her main focus on women’s contributions to art occupations that were once exclusively male domains at Disney — animation, design, background painting, film and sound editing, storyboarding, Imagineering, voice artists, actresses, dancers and models –she includes accomplishments of women within other Disney employment structures, such as publicity, publications and advertising.

Mindy Johnson’s Ink and Paint is a comprehensive treasure trove of fascinating information celebrating “women’s work” in the art of animation, one that is long overdue and much needed.

A shout-out to Tamara N. Khalaf, the gifted book designer who created appealing designs and cogent layouts illustrating Ink and Paint, as well as the Destino and Oswald Rabbit books.

When I was a kid in the 1950s, I loved Harvey Kurtzman and his Mad magazine cohorts:  cartoonists who drew wild, satiric action panels lobbing parodic grenades of ridicule at Eisenhower-era complacency and conformity. I thought, by contrast, Ernie Bushmiller’s comic strip Nancy was so . . . booorrring.  I disliked the minimal, bland design, the lame jokes, the going-nowhere lead characters: chubby Nancy with her porcupine-hair and concrete hair bow, and her chubby pal Sluggo wearing his eternally stupid hat.

But now, in the 21st Century of my dotard-ness, my mind has been radically changed toward Ernie Bushmiller’s Nancy strip and characters!

Yes, I have seen the light due to Mark Newgarden and Paul Karasik’s mesmerizing, brilliant, master class of a book on the art of cartooning: How to Read Nancy – The Elements of Comics in Three Easy Panels.  This entertaining, highly informative approach to good ol’ Nancy, promises that “everything that you need to know about reading, making, and understanding comics can be found in a single Nancy strip by Ernie Bushmiller from August 8, 1959.”

It’s all true and it’s all there:  how to stage a gag for maximum impact; how to draw strong storytelling poses; how to write succinct dialogue; what to leave in and leave out of a drawing; the staging of action; Bushmiller’s place in the history of comic strips.   Their fascinating book is a clarion call for clarity in art — the foundation without which, as Stephen Sondheim says, “nothing else matters.”   Cartoonists: buy this book, read it, and live it!

Fret not if you missed visiting in person the recent grand, magnificent exhibition of Michelangelo’s drawings at the Metropolitan Museum of Art.  This large book has illustrations of all the art displayed in the show, accompanied by cogent essays written by the show’s curator (Ms. Bambach) and five other Michelangelo experts.

My personal awe of the once-in-a lifetime exhibition was registered on John Canemaker’s Animated Eye blog posting on December 1, 2017, here:

One thought on “EYE Looks at Four Books and a DVD”